by Mega Ran and Storyville 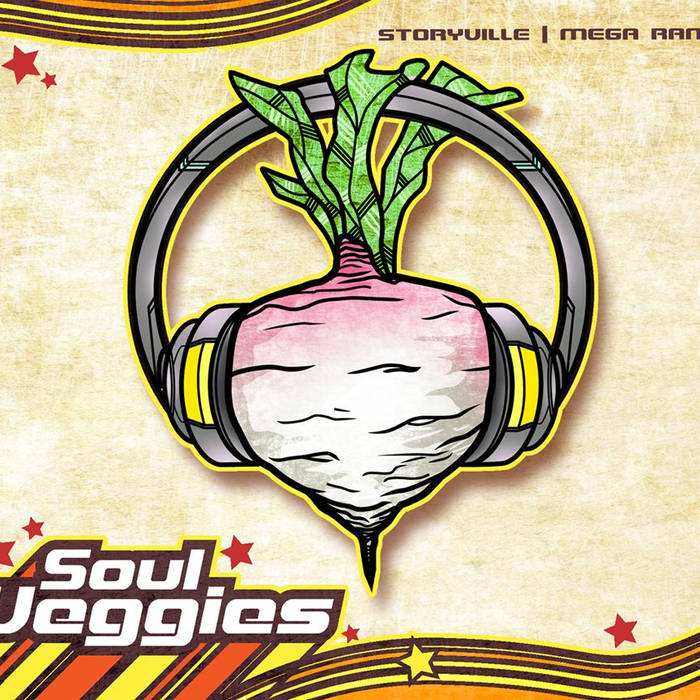 Jay-Radd This lyrically nutritious cornucopia is bursting with morsels of wit and fun. And my man put a Golgo-13 inspired track on it. you don't even know about Golgo-13. YOU DON'T EVEN KNOW. Favorite track: Eye In The Sky (feat. Russel Tate).

Jeremy Sawdon This album is delicious! Exquisite blends of Soul and Funk. Mixed well. Add a dash of humor, coupled with clever wordplay. One of my favorite albums these two Master Chefs have cooked up! Bon Appetit! Favorite track: 'Til Morning Comes.
more...

PHILADELPHIA, 2004. Random, aka Mega Ran, and Storyville met as colleagues in an underground Hip Hop collective. Ran was already known around town as one of the best up and coming emcees while Story was starting to build a buzz on the battle scene. When they first met, their musical chemistry was undeniable. It wasn't long before Storyville was showing up on Random's records in different capacities. In 2005 Storyville produced a record with a violist named Holly Fulton, and Random turned that instrumental into the song "Push".

Eventually Random moved out to Phoenix and Storyville went off to New York to pursue recording and mixing. The two stayed in touch over the years but it wasn't until 2008 and when they really reunited. They both independently decided to enter the Scribble Jam Rap Battle preliminary rounds in their respective locations - Random in Phoenix, Storyville in New York. Each won a place in the final competition (and the very last Scribble Jam) in Cincinnati. The two reconnected like they had never missed a step. In 2009, Ran wrote a song with producer Samik, which Weiss engineered. That song was "Splash Woman" and became Mega Ran's most popular song to date.

Fast forward to 2015, and now Random is also known as Mega Ran, the first rap artist ever to be licensed by Capcom. The world's foremost video game inspired musician. Storyville is now a leading mixing engineer, whose tutorial series "Mixing Rap Vocals" has been accessed over a million times.

"It could be my most complete work ever, and I don't say that much," Ran says of the project's progress. "We're both stepping outside of our comfort zones and creating really challenging and fun music." The album will contain much of the fun that the two have exhibited on tracks like "UknowTheName," and the musicality of tracks like "Push" into one concise package.

"The timing was finally right," says Storyville. "We've been so busy, but we've carved out the time to dedicate to this project, and it shows." Weiss has spent the last seven years engineering for some of the biggest names in music, including Grammy winners Arrested Development, George Clinton, and Ronnie Spector. "My career as an engineer really took off, but making this project with Ran called me back to my roots."

Meanwhile, after being named LA Weekly's "Artist Likely to Be Big in 2014," Ran has made good on the projections in superhero-like leaps and bounds. He has organized successful tours of the US, Japan, and Europe, released a documentary DVD, orchestrated a hugely successful Kickstarter campaign, all while releasing several critically acclaimed albums.

The Soul Veggies album will include production by Storyville, Small Pro, frequent collaborator Samik ("Splash Woman") and more, and guest vocals by legendary MC Wise Intelligent of the acclaimed group Poor Righteous Teachers, among others. The album contains everything we've seen from the two, solo and collectively, from B-Boy styled park jams ("React,") humorous contemporary rap commentary ("Rappin About Rappin") to carefully constructed introspective tales ("Another Day"), and of course, video games ("Life's A Game").