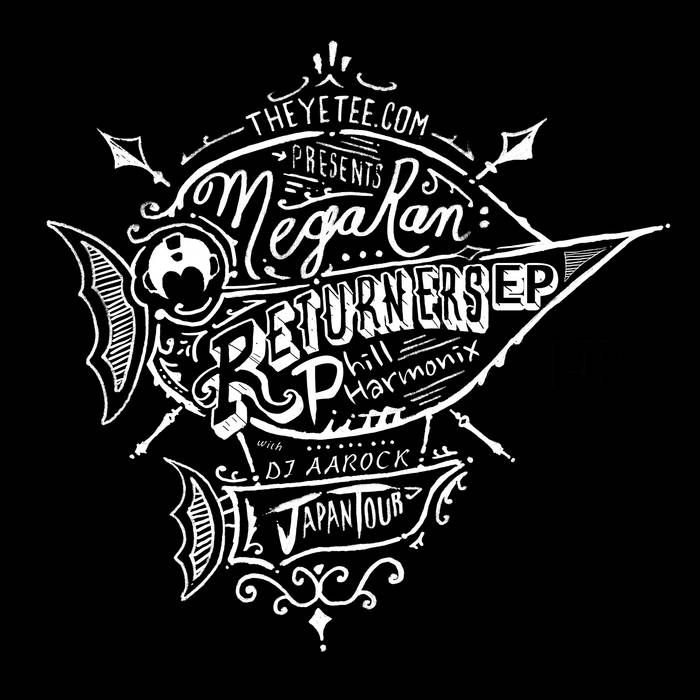 sd71000 To put it simply, it's a breath of rap fresh air. Mega Ran and Phill Harmonix really deliver the goods. Favorite track: Been A Long Time (The Returners' Anthem).

Paul Bunyan Dude, it's Mega Ran and Phil Harmonix ripping up the scene for the true hip-hop heads. Lyrics are precise and the beats are well done. If Mega Ran gets enough downloads he'll release a full-length. Phill's emceeing is top notch and deserves top billing. Welcome them back to Japan, family. Favorite track: Wanna Be.

Jeffery Wright Because I mitemega ran more than I can even say Favorite track: Death To The Titans.

ALL PROCEEDS BENEFIT "THE RETURNERS TOUR," a 5 day Japan trip in which Phill, Ran and friends will record, perform and see the sights in Japan, while adding additional footage to the Kickstarter project documentary.

Mega Ran, who seems to never stop producing, is at it again with new release “The Returners EP.” The album is split between Ran and frequent collaborator Phill Harmonix, with all tracks being produced by DJ AAROCK.

The album’s proceeds will assist with costs for the trio’s upcoming 5 day Japan tour of the same name. As opposed to seeking funds through today’s crowdfunding sites like Kickstarter and Indiegogo, they opted to create and album and let the donations fund the tour, in addition to enlisting small businesses to back the tour in exchange for ad space on tour materials.

“It’s the old fashioned model, which is a lot of what this album represents,” Ran says. “This album is a throwback to the old school that shaped and molded all three of us, so it was only right to go directly to the people.” T-Shirt company TheYetee.com has agreed to sponsor the tour at the highest level, creating shirts, album cover and tour promo images.

The tour, which starts March 21 and ends March 25, will hit Tokyo, Kyoto and Yokohama. It is Ran’s 3rd trip to Japan, AAROCK’s 6th, and Phill’s first. While there, Ran and crew will record interviews and additional footage for Ran’s previously kickstarted Blu-ray documentary project, as well as collaborate with some of Japan’s best musicians such as chip musician Kunio, DJ/producer Volta Masters, game composer Motohiro Kawashima (Shinobi, Streets of Rage 3).

The title is an ode to the resistance outfit of the same name from the Super Nintendo classic game “Final Fantasy VI.” Ran and Phill hope to have a journey that will be talked about for years to come much like this classic video game.

Lyrics by R. Jarbo and P. Hanson.
Production by DJ AAROCK
Except "The Gift" produced by Fingaz
and "Traveler" produced by Arnor Gislason
Mixed by Brian Gigerich at HKS Studios, Glendale, AZ
Mastered by The Jokerr