from The Force Pull (Digi​-​Single Pack) by Mega Ran 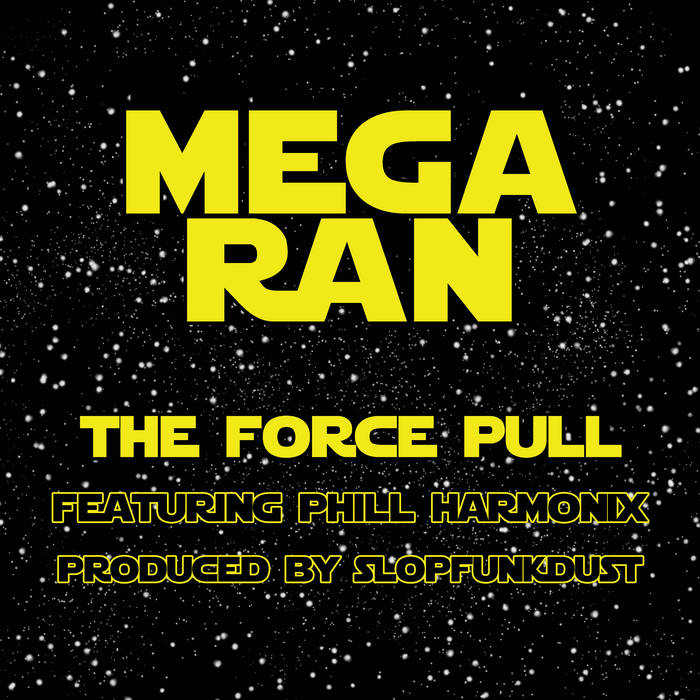 Before mega ran would come into inception

Everything you ever experienced would be questioned

a man would be admired for the depth of his perception

we were kids doing backspins on cardboards

reenacting scenes at recess in school

Commando, E-11's are charged with ammo

you are unwise to lower your defenses

we bust through the entrance, to snatch our percentage

a new hope arises like a city in the clouds

gimme 12 parsecs for the Kessel Run

the pod-race to immortality has just begun

A long time ago in a galaxy far away,

a love hate relationship started, really it's hard to say

they do something ridiculous i accuse them of milking it

but then something new comes out and i'm digging it

you could find my lack of faith disturbing

but i couldn't believe the scripts they really turned in,

so forever give em the dopest poems

you can use my notes to patch broken homes

watch your mouth kid or you'll find yourself float in home

ushering a new era in rap

Admiral Ackbar's right, cause its really a trap

it's May 4 everyday for the millions of cats

new trilogy, for real, yo they bringing it back

for all y'all, Ran and Phill we play hard ball

i saw y'all shorter than the screen time for darth maul

but saying i'm mad is a lost cause,

Before I say anything else, I must address
A lie, Han shot first, between you and I
In fact he also shot last, Greedo didn't pull the trigger
Han simply left him leaking and dashed
It's retarded, the place for Star Wars where my heart's at
These rap cats mouths is bigger than grown Sarlacs
Two Death Stars in 30 years, wear your hard hats,
My aim is better than Luke's while bagging womp rats
Moving at light speed, the rhyme flow is frightening
Exciting and charging the crowd like purple lightning
A force to be reckoned with, don't even bother
Phil and Ran a bigger reveal than Luke's father
Slaughter beats like Sand People hunting Jawa
I care about the story, George couldn't be bothered
I can't wait for the sequels, me and my people
With roll deep through, cinemas, we let the geeks loose