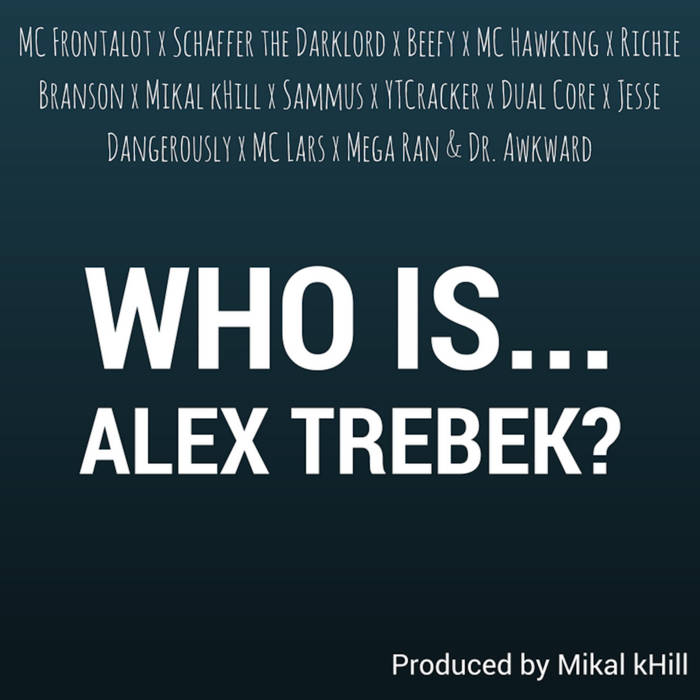 Suck It, Trebek
By Nerdcore

Schaffer The Darklord:
Hey, Alex, I'd like to buy a vowel: Oh?
We're the misfits of which you've run afoul, bro
I Double Dare you to Press Your Luck with us and our crew
Let's Make a Deal or No Deal, you brought this Family Feud
Beefy:
Forgive the vitriol, we get a bit bombastic
But when it comes to Jeopardy, well I prefer Dan Patrick
Call us losers then back track it like ya didn’t really mean it
On a show that’s made for geeks, yo what ya think we wouldn’t see it?
MC Hawking:
Yo Alek Trebek you best check your neck,
You got no respect for the nerdcore set,
And while we don’t forget, we been known to forgive,
So if you genuflect we might let you live.

Richie Branson:
Yo, I heard you called the squad nothing but losers
Well the only thing I lost was a couple of tumors
While we on the subject I think you lost your mind
Like your moustache man you really crossed the line
Mikal kHill:
Seems ill advised to diss a group of backpack rappers
Flipped the script includes a bunch of black hat hackers
I’m the IT Manager, audio daily double
WANparty of MCs that ‘s bursting your bubble
Sammus:
I used to come to jeopardy to learn more stuff
Now you best to not be messin w/ my nerdcore buzz
Just ride the wave if you can catch it grab a surfboard love
Oh we stole your demographic? This a turf war bruv?
They said you callin’ me a loser yo that’s news to me
O’ you mad you lost more viewers than there used to be be?
You Mad I’m brighter than some fireworks from Jubilee?
and I do math and I can rap and I got I two degrees
YT Cracker:
double degrees our daily double to the maximum
copper conducted into platinum ytcracker hacking em
the fact that im still defending fans when they laugh at em?
dual core let em know how nerd life attacking em
Dual Core:
Something's rotten, never forgotten, knowing losing isn't an option //
The greatest undefeated champion of the game, his name is Watson

Up in the news, dropping the clues, setting the record with a new score //
"The best rapper alive", duh, who is Dual Core?
MC Frontalot:
Trebek! You're not as clever as you endeavor to seem.
Hope somebody scribbles ‘Loser’ on the podium screen.
Doubling your Daily dis dose cause you’re just that wrong,
and you STILL look weird without your moustache on.

Jesse Dangerously
What is a Bully, a phony, a know-it-all with all the answers? Who is
Full of baloney and only always condescending? Who's the
Meanest Canadian plus the cheapest comedian? Who left his
Lane and jumped the median? Heyyy, we're only teasing him!
The reason I’m reacting isn’t that you called us losers - we are!
We based a genre on it, flaws can all be used as PR
But you were rude to Susan and it goes to show how little you
know, pal, it's really a joke: YOU HOST A TRIVIA SHOW, ALEX
MC Lars:
And what did you expect when you’re making fun of guests
Joyful smiles that you wreck here’s a song for you Trebek
But I’m really not upset - in fact I’m quite surprised
the first press that we’ve gotten since? when? 2005?
Mega Ran:
Alex Trebek you lost a lot of respect
I gotta check you off the rip for coming outta your neck
Talking sideways about nerds, man, you a trip
Guess you hadn't heard nerds make up most of viewership
Nerdcore is home to some to some serious lyricists
I'll break this down in a format you're familiar with
This host gets roasted on snl --yearly
Hosts a show for nerds and doesn't know that - clearly
No one likes a know it all, condescending blowhard
Easy to be snarky when you're holding all the note cards
Susan got the last laugh, and the cash,
You're good at any show, you got a lifetime pass


Dr. Awkward:
Georgie, you should start thinking before you speak
Your achievements are watching smarter nerds succeed
But losers, my dudes, maybe he wasn’t wrong
‘Cause we did spend all day making this freakin’ song